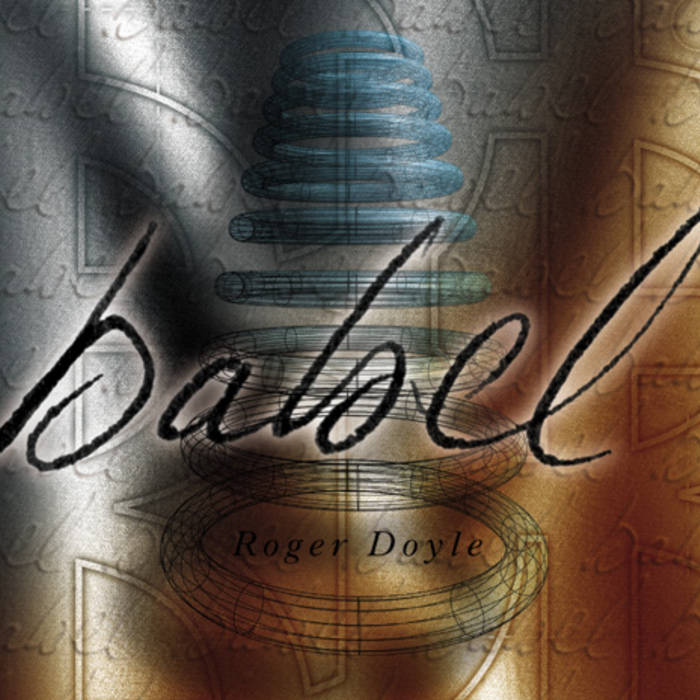 Babel bristles with contradictions, drawing together many languages and idioms both seriously and ironically. It utilises an array of music technologies available to composers as the 20th century came to a close. It is vast and full of connections which become clear after repeated listenings. There is so much in it to know.

Originally released as a 5-CD set in 1999, the first 3 CDs contain 'rooms' within an imaginary Tower oF Babel (a kind of aural virtual reality) and the other 2 CDs contain KBBL - the Tower's fictitious radio station, and 'live' circus music from the Tower.

The Entry Levels that are like overtures, openings in the wall, that contain material from all parts of the tower, and are giant collages.
In the next apartment to Mr. Brady's Room we overhear a piano lesson being given, or maybe someone just practising the piano, a waltz. Mr. Brady is also rehearsing his solo that he will perform in Pagoda Charm on [BABEL - Temple Music]. We can surmise that both  Mr. Brady's Room and the piano player's apartment are somewhere off The Stairwell, as we can hear the same stuttered waltz wafting through it. Somewhere close by too is the clarinet player in the Squat, as we can hear her intermittently wafting too. Inside the Squat we hear a distant piano, but not the one of the piano lesson.
In The Stairwell are sudden changes in acoustic perspective, analagous to editing/changes of shot in film. In part 2 on track 7 we notice it several times especially at 6'58 (the piano lesson up close).
The film Blade Runner is an acknowledged influence on the composition of The Room Of Rhetoric, a virtual dream space embodying language, and attempted language. The title comes from the poem of the same name by Sebastian Barry.

The solos on these recordings evolved in collaboration with the individual musicians and I am extremely grateful to Tim, Juliette, Lee, Paul (RIP) and Cindy for their unique talents. See track info for more detail.

“This astonishing set marks the culmination of his most ambitious work to date, recorded over a ten-year span of time ... works of true genius that combine the finest elements of Pierre Henry and Nurse With Wound.” — Other Music, New York 1999.

All music composed and produced by Roger Doyle ℗ and © PRS/MCPS 1990-97.
Tracks can be downloaded at CD quality and have been uploaded from original DAT masters. Total time: 77'10.
Tracks 1, 6 and 7 were recorded at the Banff Centre for the Arts, Canada - during happy residencies in 1992 and 1993.
Track 2 recorded in Mr. Brady's Room, Montréal 1992 (is that a Blade Runner owl I hear)?
Other tracks: home studio.
Track 3 was awarded a 'First Mention' (highly recommended) in 1991, and track 5 won the Programme Music Prize in 1997, both at the Bourges International Electroacoustic Music Competition, France.

Track 3 was used in' Tower Of Babel - Delusional Architecture', performed in an entire wing of the Irish Museum of Modern Art in 1992 by the dance theatre company ICONTACT. See video here:
www.youtube.com/watch?v=1M3tPVTDvB8&list=UUNonXNHKdCwTonw_bA5xvkw