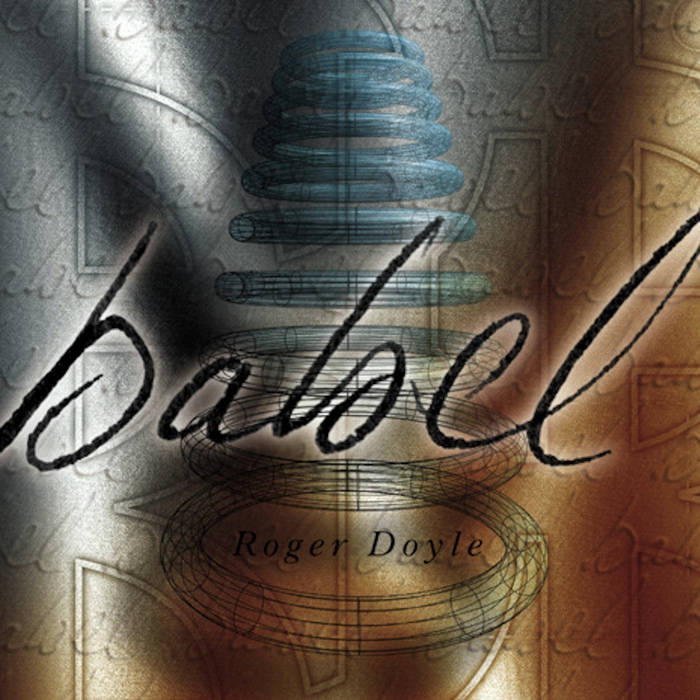 Babel is a large-scale compositional structure celebrating the multiplicity of musical language and evolving technologies as the 20th century came to a close.
Originally released as a 5-CD set in 1999, the first 3 CDs contain 'rooms' within an imaginary skyscraper tower city. This aural building being the embodiment of a modern-day Tower Of Babel; and the other 2 CDs contain KBBL - the Tower's fictitious radio station. Each of its 4 'shows' has its own style and atmosphere. Collaborating with  DJs, actors, writers and singers, KBBL is made to sound like a real radio station with ads, traffic reports, phone-ins etc.
BABEL was composed from 1990-1999 with some pieces from the 80's finding their way into KBBL (mainly on a Fairlight Computer Music Instrument). Contains 103 individual pieces of music, with 48 collaborators.

'An extraordinary achievement by award-winning Irish electronic composer Roger Doyle, in which he brings to life an imaginary world in the Tower of Babel, complete with radio stations, ghostly singers and violinists in stairwells, and all the life of a great city. Profound, funny and tenderly sad, this is music for a new world' (Circa Art Magazine).

INTRODUCTION: In this virtual architecture, where each track corresponds to a room in the tower, the first track Pagoda Charm is set in an imaginary concert-hall. In it are solos by an electric guitarist and saxophonist, both of whom can be heard elsewhere rehearsing these solos: in Mr. Brady's Room (9) and The Dressing Room (16).
Later in Pagoda Charm, a gradual acoustic shift in perspective happens, when we seem to leave the concert-hall (at around 8'00). This slowly leads us to the Mansard (an attic room with a sloped roof - a childhood memory room).
In Kalu Rehearsals (5) - where the rehearsal IS the piece - (as in Mr. Brady's Room and The Dressing Room), we hear a clarinettist, with the Cantilena music in the distance as they are both temple musics. A Kalu is a Babylonian temple musician, and Cantilena contains molecular re-arrangements of songs from KBBL.
The Iron Language Alphabet (7) is a sound alphabet containing tiny fragments of Babel within it (49 samples of music from KBBL spread over the white notes of a 7 octave midi keyboard). It opens with an heraldic trumpet solo followed by 'letters' of an alphabet being introduced one by one slowly, and then being sped up.
The solos in these recordings evolved in collaboration with the individual musicians and I am extremely grateful to all for their unique talents. See track info for more detail.
Download includes the essay BABEL - a Listener's Guide.

' Tower Of Babel - Delusional Architecture', was performed in an entire wing of the Irish Museum of Modern Art in 1992 by the dance theatre company ICONTACT. See panel above and video here:
www.youtube.com/watch?v=1M3tPVTDvB8&list=UUNonXNHKdCwTonw_bA5xvkw