Charlotte Corday And The Lament Of Louis XVI​/​Passades - Volume 1 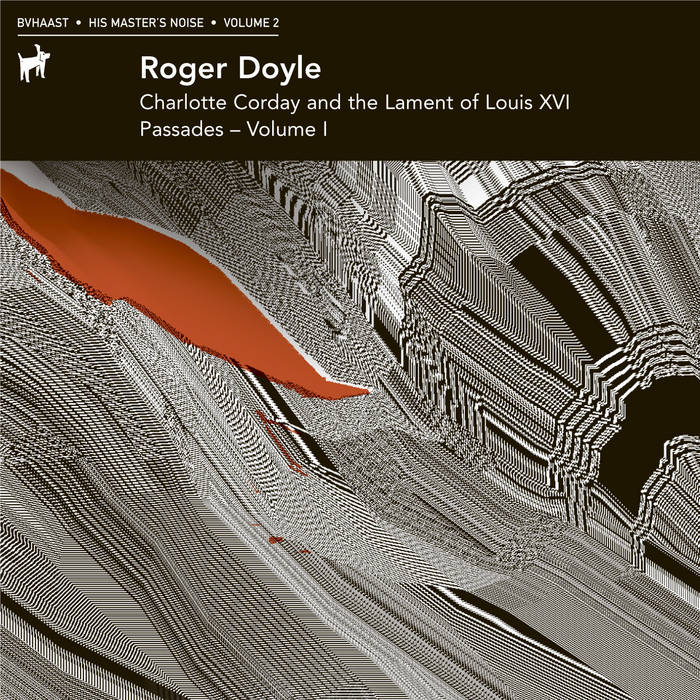 Charlotte Corday And The Lament Of Louis XVI was commissioned by the Institut Internationale de Musique Electrroacoustique de Bourges to celebrate the bi-centenary of the French Revolution. It received its first performance at the Festival Synthese in Bourges on June 12th 1989. In part 1 my actress friend and multi-collaborator Olwen Fouéré (who played the part of Charlotte Corday in Peter Weiss' Marat/Sade unforgettably in Dublin previously) collated texts from Corday letters and used her voice in extra-ordinary ways.
In part 2 I recreated the sound of an imaginary parade passing through the streets of Paris 200 years ago - Louis XVI on his way to the guillotine. The melody the pipe band are playing and the one sung by the little boy (my son Paavo, aged eleven) is from a song of the period The Lament Of Louis XVI. The drum rolls become machine guns which later become the revving of a motorbiike in modern Paris with the ghost of a horse drawn carriage passing through its streets at the end.

Passades: Working with the creative possibilities of music software which captures sounds like a freeze-frame in video or DVD, making sound movement stop, or go forwards or backwards slowly, I began composing the Passades in early 2002. A Passade is an equestrian term meaning to move backwards and forwards over the same space.
Seeing great possibilities of exploring this technique in detail, I continued to work on the Passades until there were 3 hours of them spread over 3 volumes, culminating in the The Ninth Set in 2007.
The process has been to try to find connections between them even as they proliferated.
The technique involved real-time eye to ear to hand (on the mouse) co-ordination and each 'take' was recorded. The mouse manipulations felt like an aural form of calligraphy in that there were good takes and bad takes and the chance that a a good take might go wrong.
Takes were layered and crossfaded to produce these 'sets'.
The software looked for an external sound source to 'freeze' and I used my own earlier compositions for this and was amazed that the frozen versions rarely sounded like the originals from which they came.

'Roger Doyle produced some of the most remarkable electro-acoustic music of the last twenty-five years with his Babel box set. Here after a short break he returns with a new manifesto of sound.
The first thing you notice about the Passades is how rich and full the sound is. The production creates a wash of textures and pitches that seem to hang and drift in the air. Doyle’s subtle touches and orchestration draw out the individual qualities of all the sound sources he uses. The effect is more than slightly intoxicating, as if you can feel time slowing down. The overall feel does seem like a progression from Babel but using many of the techniques and atmospheres that made that release so rewarding. Each Passade has a few sections, some abrasive and some wonderfully smooth, almost melancholic. The textures well up and sweep you to far away lands and distorted planes of existence. This work retains a uniqueness that puts Doyle firmly in a musical sphere of his own making'. Musique Machine 2004. Read the full review here: www.musiquemachine.com/reviews/reviews_template.php?id=589

All music composed and produced by Roger Doyle ℗ and © PRS/MCPS 1989 and 2001-3
Design: Tim Redfern.
Tracks 3-9 recorded at the composer's home studio. Tracks 1-2 recorded at the studios of IMEB, France, and Soundtrack Services and The Square Studio, Dublin. Voices: Olwen Fouéré, Paavo Evans-Doyle.
Tracks can be downloaded at CD quality and have been uploaded from original masters. Total times: 78'30 (download); 73'45 (CD).