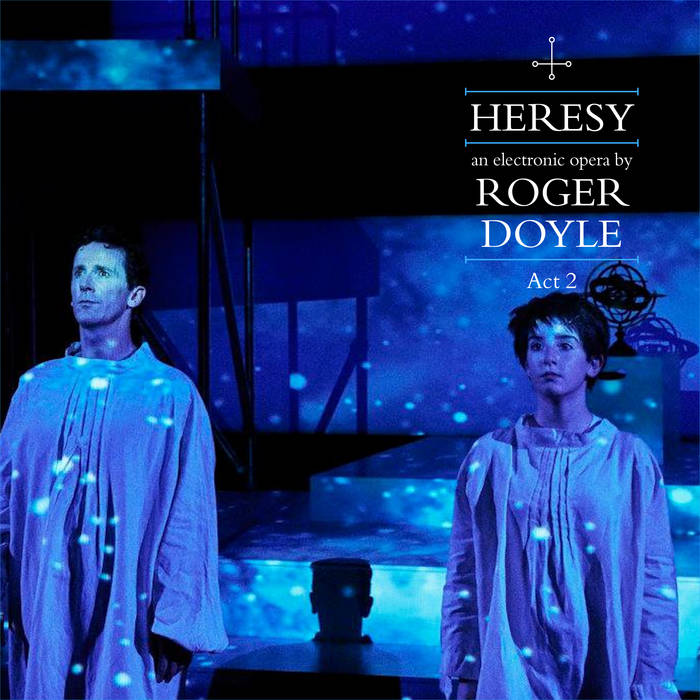 (...continued from Heresy - Act 1 page)
After the overture, Act 2 continues with a scene in the residence of Cardinal Inquisitor Belarmine (sung by Robert Crowe) who attempts to make Bruno recant the 8 charges of Heresy laid against him – unsuccessfully; followed by his trial in Rome before the inquisition, and a scene in his cell where he refuses to recant.
Next is a 22 minute continuous piece of music, called The Cell – Hallucinations, going through many different styles incorporating episodes in his cell the night before he is executed where he is visited by a diversity of characters from his life: himself as a young boy, his literary creations, and from the future including James Joyce - scenes that time travel to the present day. The scene ends with him alone.
Following this is a visitation from the Goddess Circe (sung by Caitriona O’Leary) who sings: ’How shall we honour the Nolan, who has found the way to ascend to the sky’, just before he is taken to his death. Giordano Bruno (born in the town of Nola, and often referred to as The Nolan) was dragged from his cell, muzzled, taken to the Campo dei Fiori, stripped naked and burned at the stake.
The opera ends with Bruno’s soul in outer space.
Watch the trailer here: vimeo.com/250368750.

I should explain that this recording is taken from 2 casts, from 2 different productions. In the first, in an ‘in development’ 40 minute version from 2013 (called The Death By Fire Of Giordano Bruno), performed at the Kilkenny Arts and Dublin Theatre Festivals, the role of Giordano Bruno was taken by Julian Podger, and Morgan Crowley took the roles of King Henry III, James Joyce and the Cardinal at Bruno’s Trial. I have kept Morgan’s performance of these 3 smaller roles from the earlier recordings, as well as his singing of the extended lead role of Giordano Bruno here.
In 2013 the part of Bruno as a young boy was taken by boy soprano Alex Smith, and I have retained his singing here in act 1 tk.2, and act 2 tks.4 (both briefly), and 7 (at 11’30)…and by software transformation of his voice in act 1 tracks 3, 7, 12, and act 2 track 1.
Also, the roles of a courtier, a priest and the Goddess Sophia in the 2013 production was sung by counter tenor Iestyn Morris, who appears here in act 1 track 2 (at 3’04, 6’30)), act 2 tracks 4 (at 0’22 onwards), and 7 (at 9’41, 14’48 and 18’04). I also invited guest tenor Ahmad Alkaran to sing wordlessly in act 2 track 7 at 17’42.

For this recording I have added 2 tracks that were in preparation but not used in the 2016 production. In the months after the premiere I extensively revised them: Magic Memory now appears as an Entr’acte at the end of act 1 (Bruno became famous for his prodigious memory and the system he developed around it); and Belarmine Coda at the very end, incorporating fragments of the recorded sung parts of Robert Crowe's Belarmine Scene.

The premiere of HERESY took place at the Project Arts Centre, Dublin, on October 28th 2016, made possible with an Arts Council Opera Production Award, and it was broadcast on RTÉ Lyric fm radio on September 3rd 2017.