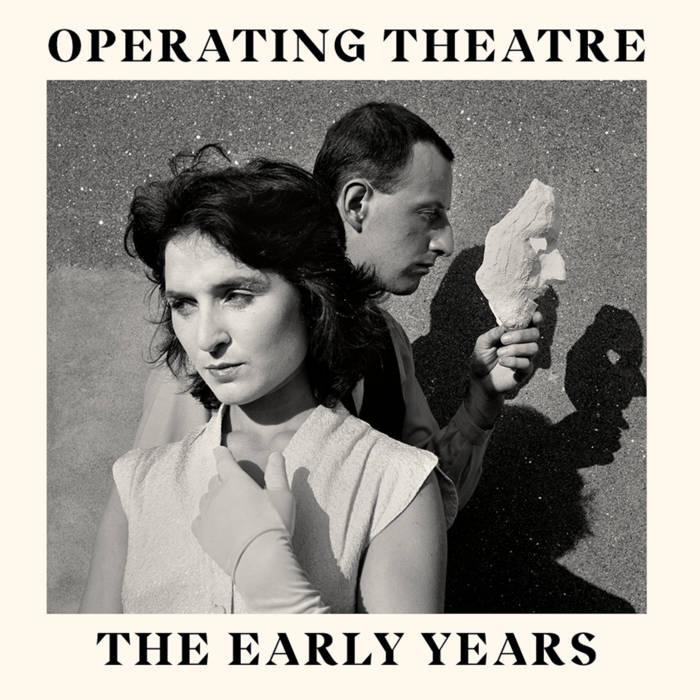 Aighiv Dancing with my Love. Favorite track: Spring Is Coming With A Strawberry In The Mouth (Doyle/López).

This collection has been released to celebrate the 25th anniversary of the founding, by composer Roger Doyle and performer Olwen Fouere, of the music-theatre company Operating Theatre.
Operating Theatre has been active in two phases: the first from 1981 to 1988, and the second from 1998 to 2008.
This double album celebrates the first phase, during which the company operated as both a theatre company, integrating music as an equal partner in the theatrical environment, and as a band releasing records. Roles were flexible within the company in that Fouere also sang and Doyle also acted.

All music composed by Roger Doyle ℗ and © PRS/MCPS 1980 – 1986 and 1999, 2001.
‘Austrian'/‘Positive Disintegration' CBS Records (Ireland) 7" single 1981; ‘Blue Light And Alpha Waves'/‘Rampwalk' CBS Records (Ireland) 7" single 1982.
‘Fingerdance Waltz/Hymn' ...music from the Operating Theatre production of ‘ Ignotum per Ignotius' , a 50 minute music-theatre piece performed by Doyle and Fouere, written and directed by visual artist James Coleman - tour of Holland 1982.
‘No Come', ‘Syllable', ‘Dragon Path', ‘The Confectioners' and ‘Miss Mauger' - from the mini-LP ‘Miss Mauger' on the Kabuki label, London, 1983.
‘Part Of My Make-up' - premiered on 'The Live Arts Show' on Irish TV, demonstrating the latest in music technology - the Fairlight Computer Music Instrument 1983.
‘Sir Geoffrey' , ‘Satanasa' and ‘Clubmusic/Amene-Moi' are from the Operating Theatre production of ‘The Diamond Body' , written by Aidan Mathews, a seventy five minute solo performance by Fouere, which opened in the Project Arts Centre in Dublin in 1984 and toured to London, Glasgow, New Jersey, Avignon and Caracas - directed by Brendan Ellis.
Also in the Project Arts Centre 1984 the company mounted a production of the Lorca play ‘The Love Of Don Perlimplin And Belisa In The Garden' , turning it into a 56 minute ‘electronic chamber opera of sorts' - directed by Fouere with Doyle and Elena Lopez played the title roles. Tracks included here: ‘Ah Love, Ah Love', ‘Belisa In The Garden' and ‘Don Perlimplin Has No Honour'.
‘The Tractor' from 1984 - first outing here.
‘Queen Of No Heart' and ‘Spring Is Coming With A Strawberry In The Mouth' were the result of an initial collaboration between singer/lyricist Elena Lopez and Roger Doyle and were released by Mother Records, the label set up by U2, as a single by Operating Theatre in 1986, with Lopez on main vocals and drummer Sean Devitt joining the band for this recording.
‘Before She Was Asked To Dance' was found on an old cassette. First outing here -1986.
‘Johnny's Body At 002' is a work made in preparation for the first Operating Theatre production in phase two, ‘Angel/Babel' (1999). The 2 tracks also appear in Roger Doyle's BABEL.
4 BONUS TRACKS: :'Gloss And Eggshell', 'Elation After Hours' from Miss Mauger mini-LP (1983); and 'Honey I'm Home'and '10 Themes' from 'Chair' (2001) Peacock Theatre, Dublin.