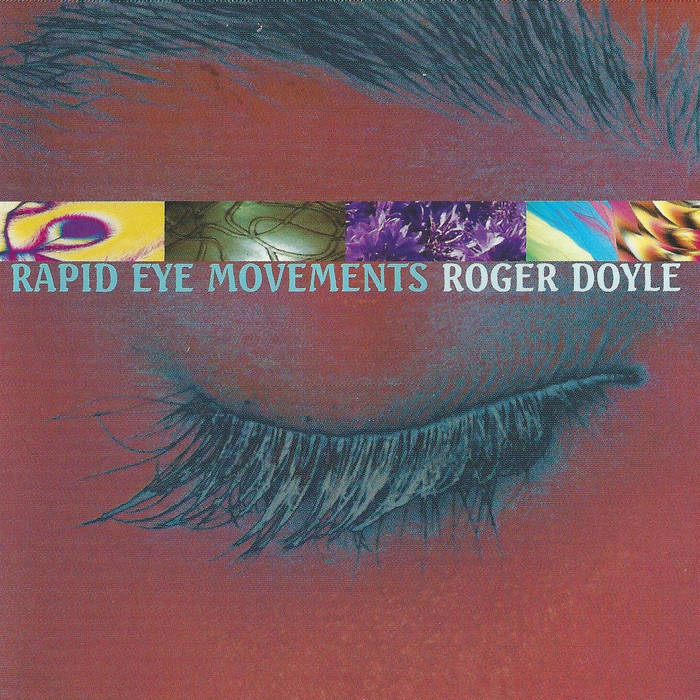 This album contains 6 works composed by Roger Doyle between 1968 and 1980, remastered in 2002. The earliest piece is the Piano Suite, composed when he was 19/20, and the latest Rapid Eye Movements, his attempt at a 'masterpiece before the age of thirty' .
Upon its initial release in 1981, the UK Sounds magazine wrote: 'without doubt one of the most exhilerating LPs and unorthodox concepts ever submitted to vinyl'.

'Fin-estra was recorded at the Experimental Music Studios of Finnish Radio (Kokeilustudio Yleisradio), Helsinki, where I spent a year on a Government scholarship 1976/77. It was revised at the studios of the Institute Of Sonology, at the University Of Utrecht, The Netherlands in 1977.
Studio transformations of a recording of my All The Rage for symphony orchestra, accompanied by the sound of children playing outside the studio window. Fin: Finland; estra: orch-estra; finestra, fenetre: window.

The Piano Suite was composed whilst studying composition at the Royal Irish Academy Of Music, in 1968-69. The second movement was composed in a hotel room in Paris, away from a piano, and flirts with some 12-tone techniques and pays its conscious respects to Debussy. A version based on a section of the first movement opens Rapid Eye Movements. Recorded at Archie Simpson's Ninth Lock House, engineered by Terry McManus. Piano: Roger Doyle. The 3 movements are: Journeys, In Paris, Dominique This Year.

Originally Why Is Kilkenny So Good? was based around an interview with a 13 year-old drug addict, recorded off the radio in 1971. When I asked for permission to use the recording, I was refused. So with the task of incorporating the marvellous title, my flat-mate Johnny Robinson and I reconstructed an imaginary interview to replace the radio one. It is one of the very first tape pieces i ever composed. Originally released on vinyl in 1975 on the LP Oizzo No.

Rapid Eye Movements was recorded on location around Dublin, at Willow Studios and at The Institute Of Sonology, Utrecht, 1978-80. Edited at Pigeon House Road and Finnstown House.
Human beings experience two types of sleep, which are categorised by the eye movements associated with them: REM (Rapid Eye Movement or dream sleep) and non-REM. In REM sleep, beneath the eyelids, the eyes move around, just as if their owner were wide awake and watching something.
The piece is constructed in eleven seamless sections, which I called: Mix 1 (overture), Beach 1, Mix 2 (at 6'49), Beach 2, Edit 1 (at 11'55), Edit 2 (this is where I placed the track split to break up the 30 minutes), Voice improvisation, Mix 3 (related to Mix 2), Bedroom 1, Mix 4 (which arrives back to the end of Beach 1), Bedroom 2. Also, woven into the piece are dozens of aural deja vu moments, where sounds heard before re-appear in different contexts.

Rapid Eye Movements was awarded a First Mention at the 1981 Bourges International Electro-acoustic Music Competition, France. It and Fin-estra were originally released on vinyl in 1981 (and later on CD in 1995) under the moniker of Operating Theatre on the United Dairies label, London; and under his own name on cassette on Audio Arts, London, in 1981'.

All music composed and produced by Roger Doyle ℗ and © PRS/MCPS 1968-80.
Total time: 74'50. Tracks can be downloaded at CD quality and have been uploaded from original masters.

'Roger Doyle’s Silverdoor label has now re-released his United Dairies masterpiece. Rapid Eye Movements was originally released under the artist name Operating Theatre in 1981, and for me it is an unmatched classic of tape collage. No kidding, I like to refer to this album as the Citizen Kane of musique concrète. The 30 minutes of "Rapid Eye Movements" is my favorite moment in avant-garde music. It's the aural equivalent of a disjointed, ephemoral dream, full of deja vu moments that seem even creepier and more evocative with each listen. I'm on at least my 100th listen of Rapid Eye Movements, and it still hasn't become boring or predictable'.
(Brainwashed Magazine 2003) Read the full review here: brainwashed.com/index.php?option=com_content&view=article&id=2496:roger-doyle-qrapid-eye-movementsq&catid=13:albums-and-singles&Itemid=133

'Roger Doyle seems to suffer from a devastating urge to birth magnum opii. Most recently this has manifested itself in a six-hour opera Babel written with the assistance of 48 collaborators, earlier though, we have Rapid Eye Movements, a 30-minute, obliquely successful, attempt at making a “masterpiece before the age of thirty”...
“Rapid Eye Movements” is a strong, complex and entertaining piece of music, giving context and attention to the progression of a somewhat obscure composer, finally acknowledged for his contributions'.
(Dusted Magazine 2003). Read the full review here: www.dustedmagazine.com/reviews/877