from Finnegans Wake - Suite Of Affections by Roger Doyle 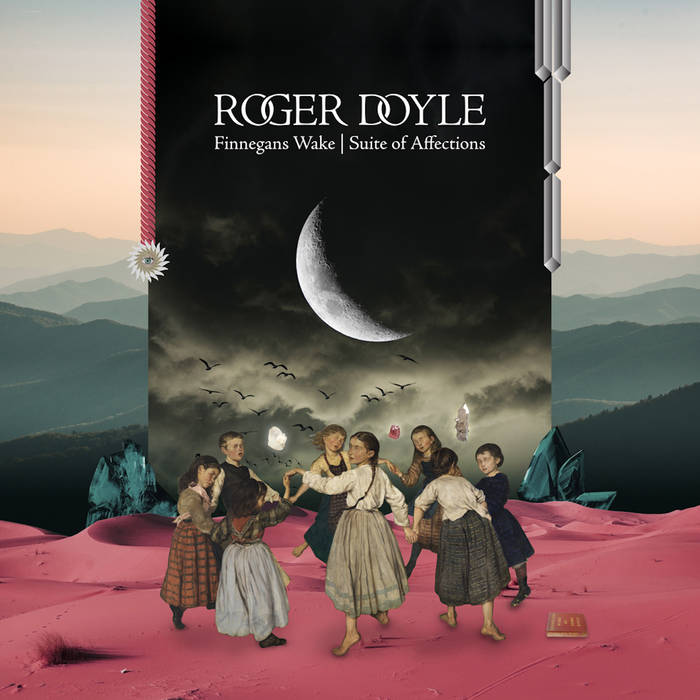 The answer, to do all the diddies in one dedal, would sound: from pulling himself on his most flavoured canal the huge chest- house of his elders (the Popapreta, and some navico, navvies!) he had flickered up and flinnered down into a drug and drunkery addict, growing megalomane of a loose past. This explains the litany of septuncial lettertrumpets honorific, highpitched, erudite, neoclassical, which he so loved as patricianly to manuscribe after his name. It would have diverted, if ever seen, the shuddersome spectacle of this semidemented zany amid the inspissated grime of his glaucous den making believe to read his usylessly unread-able Blue Book of Eccles, édition de ténèbres, (even yet sighs the Most Different, Dr. Poindejenk, authorised bowdler and censor, it can't be repeated!) turning over three sheets at a wind, telling himself delightedly, no espellor mor so, that every splurge on the vellum he blundered over was an aisling vision more gorgeous than the one before t.i.t.s., a roseschelle cottage by the sea for nothing for ever, a ladies tryon hosiery raffle at liberty, a sewer-ful of guineagold wine with brancomongepadenopie and sick-cylinder oysters worth a billion a bite, an entire operahouse (there was to be stamping room only in the prompter's box and everthemore his queque kept swelling) of enthusiastic noble- women flinging every coronetcrimsoned stitch they had off at his probscenium, one after the others, inamagoaded intoajustil-loosing themselves, in their gaiety pantheomime, when, egad, sir, acordant to all acountstrick, he squealed the topsquall im Deal Lil Shemlockup Yellin (geewhiz, jew ear that far! soap ewer! loutgout of sabaous! juice like a boyd!) for fully five minutes, in- finitely better than Baraton Mc Gluckin with a scrumptious cocked hat and three green, cheese and tangerine trinity plumes on the right handle side of his amarellous head, a coat macfarlane (the kerssest cut, you understand?) a sponiard's digger at his ribs, (Alfaiate punxit) an azulblu blowsheet for his blousebosom blossom and a dean's crozier that he won from Cardinal Lin- dundarri and Cardinal Carchingarri and Cardinal Loriotuli and Cardinal Occidentaccia (ah ho!) in the dearby darby doubled for falling first over the hurdles, madam, in the odder hand, a.a.t.s.o.t., but what with the murky light, the botchy print, the tattered cover, the jigjagged page, the fumbling fingers, the foxtrotting fleas, the lieabed lice, the scum on his tongue, the drop in his eye, the lump in his throat, the drink in his pottle, the itch in his palm, the wail of his wind, the grief from his breath, the fog of his mindfag, the buzz in his braintree, the tic of his conscience, the height up his rage, the gush down his fundament, the fire in his gorge, the tickle of his tail, the bane in his bullugs, the squince in his suil, the rot in his eater, the ycho in his earer, the totters of his toes, the tetters on his tumtytum, the rats in his garret, the bats in his belfry, the budgerigars and bumbosolom beaubirds, the hullabaloo and the dust in his ears since it took him a month to steal a march he was hardset to mumorise more than a word a week. Hake's haulin! Hook's fisk! Can you beat it? Whawe! I say, can you bait it? Was there ever heard of such lowdown blackguardism? Positively it woolies one to think over it.