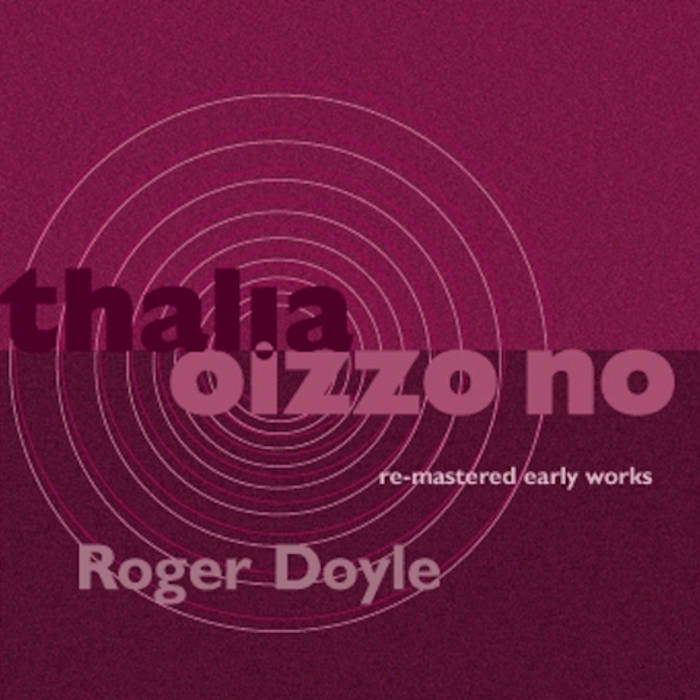 'The music on this album represents Roger Doyle's early works, re-packaged and re-mastered in 2002. It includes his extremely rare self-released 1975 debut LP "Oizzo No" and his second LP "Thalia" from 1978, originally released on CBS Classics. The earliest piece is Bitter-Sweet Suite for out-of-tune piano composed when he was 18, and the latest, Thalia, his first large-scale electronic work, composed at the age of 26'.

A name your price bonus track 12 was added in December 2014, composed in 1968, during the first few months of composition studies at the Royal Irish Academy Of Music.

All music composed and produced by Roger Doyle ℗ and © PRS/MCPS 1968-1976.
Total time: c.83 minutes (CD is 76'30). Tracks can be downloaded at CD quality and have been uploaded from original masters.
Thalia, Solar Eyes, Extra Bit and the second half of Oizzo No were recorded at the studios of the Institue Of Sonology, University of Utrecht, The Netherlands. Raw material for Thalia recorded at the 1976 Saint Patrick's Day Parade, Dublin.
Ceol Sidhe recorded in Saint Catherine's Church, Thomas Street, Dublin.
Two Movements For Flute And Strings recorded in concert at Saint Patrick's Cathedral, Dublin. Baby Grand recorded at Windmill Lane Studios, Dublin. Engineer: Brian Masterson.
Oizzo No is a Dublin way of pronouncing 'I Don't Know'.

(from notes for the premiere of Thalia): 'I never plan my compositions in advance - they take direction and shape only during the time I work on them. When this approach is successful a chain reaction occurs - possibilities branch out in many directions, all kinds of unforseen connections appear (somtimes by chance) and my mind has to cope with a growing labyrinth which has been given its freedom. It guides me as I guide it'.

'Roger Doyle began as a drummer with Supply Demand and Curve and Jazz Therapy playing free-improv and fusion music.
Thalia is Doyle’s first large-scale electronic piece, composed at the age of twenty-six. ...It’s a remarkable achievement of “gluing” sound together in order to evoke intense mood. Doyle...was hell-bent on creating a major artistic achievement in sound before the age of thirty. He worked hard to produce works of outstanding quality. It’s hard to decide if the three albums he made before thirty are his opus. Rapid Eye Movements was his third LP.– but one thing is for sure. they are exquisitely beautiful and unique in the world of music'. (Lisa Thatcher in Music Review 2013). Read the full review here: lisathatcher.wordpress.com/2013/01/24/thalia-roger-doyle-bent-on-the-road-to-brilliance-music-review/